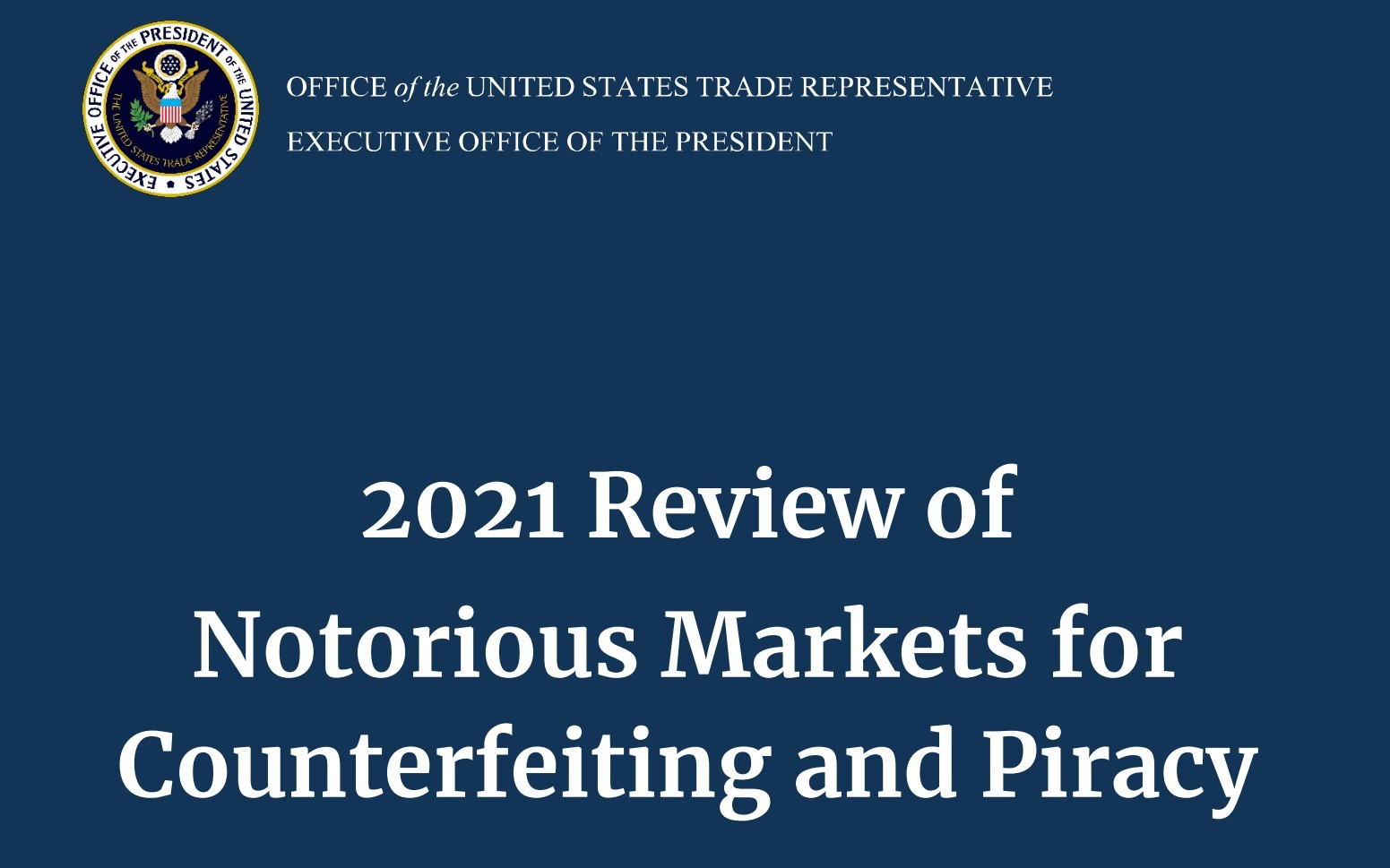 In its annual Out-of-Cycle Review of Notorious Markets, the US Trade Representative (USTR) lists a few dozen websites suspected of being involved in piracy or counterfeiting.

The overview is largely based on input from copyright industry groups, including the RIAA and MPA, which submitted their recommendations late last year.

According to the USTR, the annual overview aims to motivate the private sector and foreign governments to reduce piracy. To that end, the list identifies sites and services that allegedly engage in, facilitate, overlook, or benefit from piracy or counterfeiting.

These targets traditionally include popular pirating portals such as well-known torrent sites and streaming portals. However, in recent years we have also seen the addition of hosting companies, advertisers, and e-commerce platforms.

The outlook for this year is again mixed. As expected, the USTR mentions torrent sites such as RARBG, RuTracker, The Pirate Bay, and 1337x. The same goes for the torrent-based streaming app Popcorn Time, which has been decimated recently.

Interestingly, the USTR writes that a person who operated a Popcorn Time app in Denmark was recently sentenced to probation in Denmark. However, this is not entirely accurate, as the person in question did not create the app, but simply linked to it.

Regular streaming sites also made the list of notorious markets with Fmovies and Cuevana as prime examples, while cyberlockers 1Fichier and Uploaded also secured their places. Additionally, video hosting service 2embed also made it to the list for the first time.

The music industry has named several stream-rippers as notorious markets and FLVTO.biz, 2Conv.com and MP3Juices.cc are included this year. The same goes for the music download platform Newalbumreleases.net, which shares new and preview music.

On the publishing side, Sci-Hub and Libgen are considered two of the biggest piracy threats. The latter focuses on academic papers while the former also offers a wider selection of books, comics, audiobooks, and magazines.

In recent years, IPTV services and dedicated hack boxes have continued to grow in popularity and several have entered the NML this year. These include BestbuyIPTV.store, iStar and Spider

Iraq-based IPTV services Chaloos and Shabakaty are also mentioned. As we recently reported, the latter is allegedly operated by Iraq’s largest internet provider, which is also mentioned by the USTR.

“EarthLink Telecommunications, an Iraqi company and the largest internet service provider in Iraq, is reportedly hosting a pirate IPTV service, mobile app and website called Shabakaty and is offering this service to its internet service subscribers at no additional cost,” USTR writes. .

In addition to sites and services directly related to hacking, the USTR also uses several third-party intermediaries, including hosting companies and advertising services.

BlueAngelHost, for example, is known to describe itself as a “DMCA Ignored” hosting provider while FlokiNET allegedly does not cooperate with copyright holders and law enforcement.

Advertising-wise, RevenueHits is considered a bad actor as it is said to be one of the most popular ad networks among pirate sites.

Finally, the NML (Notorious Markets List) also includes several online services that are related to the sale of counterfeit products. These include billion dollar companies such as AliExpress, Shopee, Bukalapak and Pinduoduo.

The above is just a selection of all the notorious digital marketplaces and a full overview of all included sites and services can be found below.

A common criticism of the NML is that it is primarily based on complaints from rights holders. The USTR itself does not verify these claims in detail, despite the strong implications the report may have.

“The NML does not make findings of violations of law, nor does it reflect the U.S. government’s analysis of the general intellectual property protection and enforcement climate in countries related to the listed markets,” it said. ‘USTR.

This year, several companies have opposed a possible listing and some have done so successfully.

Advertising companies PropellerAds and PopAds successfully submitted a rebuttal after being named by the Motion Picture Association (MPA), pointing out that they have several anti-piracy measures and policies in place.

Similarly, the .IS and .TO domain name registries have also denied MPA claims that they facilitate piracy. None of them are included in the USTR’s final list of notorious markets.

A copy of the USTR Notorious Markets 2021 Overview (published yesterday) is available here (pdf). The full list of highlighted online sites/services, including those focused on counterfeiting, is as follows: