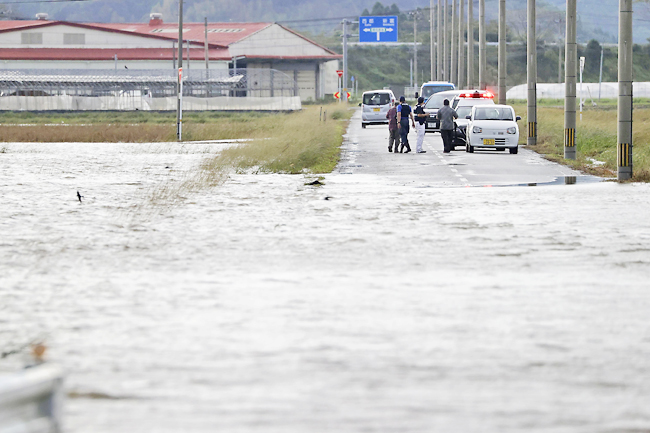 CNA – Typhoon Nanmadol brought fierce winds and record rainfall to western Japan yesterday as one of the biggest storms to hit the country in years killed at least two people, disrupted transportation and forced manufacturers to suspend their operations.

Prime Minister Fumio Kishida delayed his departure for New York, where he was due to deliver a speech at the United Nations General Assembly.

The 14th Japanese typhoon of the season made landfall near the city of Kagoshima on Sunday evening before hitting the western island of Kyushu and roaring over the main island of Honshu yesterday morning.

A river in Kyushu’s Miyazaki prefecture overflowed, flooding fields and roads, footage from state broadcaster NHK showed. Other videos showed a riverside house half-hanging over a torrent, the ripped off tin roof of a gas station and a toppled billboard leaning over a street from the top of a building.

NHK said a man was found dead inside his car, which was submerged on its roof in the middle of a field, while another man died after being caught in a landslide. Another person is still missing and at least 87 people have been injured, NHK said.

About 340,000 homes, most of them in Kyushu, were without power yesterday, the Commerce Ministry said, while Kyushu Railway said it halted operations on Kyushu and Japan Airlines and ANA Holdings canceled about 800 flights, reported public broadcaster NHK.

The storm made landfall again in Shimane prefecture, western Honshu, after tracking the coastline earlier yesterday, and was heading east at around 35 kilometers per hour, the JMA said.

The storm will veer into the Sea of ​​Japan for the second time and follow the coast north of Honshu until today before crossing overland and moving northeast into the Pacific, the agency predicted. .

New malware is spreading disguised as a legitimate zoom app