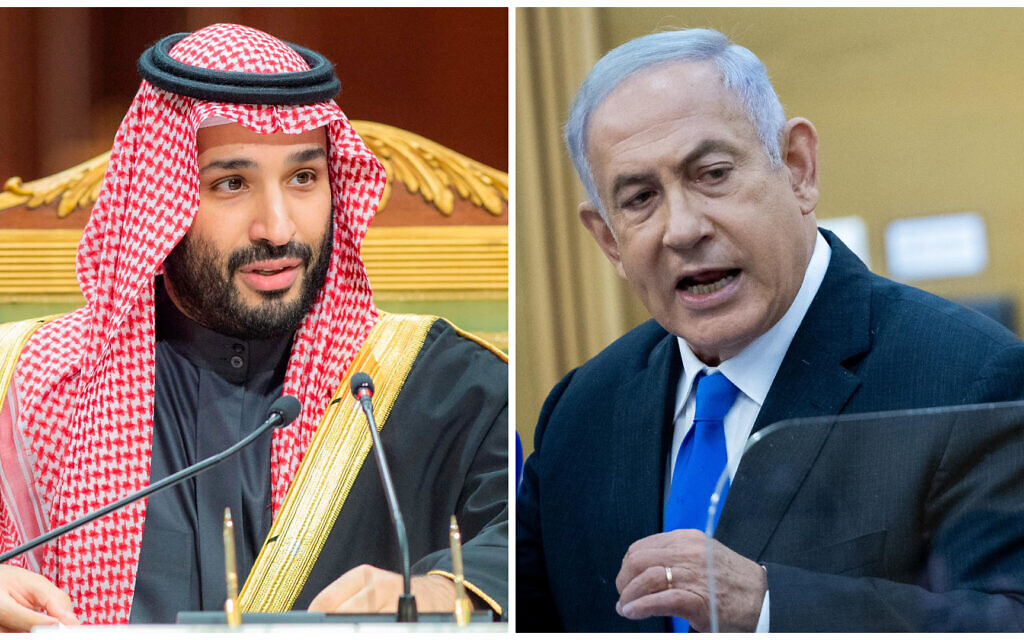 According to the report, after Riyadh’s license for the software expired, the Israeli Defense Ministry refused to renew it, citing Saudi Arabia’s misuse of NSO’s spyware, apparently referring to the case of Jamal Khashoggi, a Saudi journalist who was allegedly followed with Pegasus in leading to his murder in 2018.

Without the export license, NSO was unable to provide routine software maintenance to Saudi Arabia, and its systems crashed. Numerous calls between the crown prince’s aides, NSO leaders, the Mossad and Israel’s Defense Ministry failed to resolve the issue, the newspaper said.

The crown prince then made an urgent direct phone call to Netanyahu, asking for the renewal of the license, sources familiar with the call told the newspaper,

The call came ahead of the announcement of the Abraham Accords, a series of normalization agreements in 2020 between Israel and the Gulf states of the United Arab Emirates and Bahrain. (Later, Morocco and Sudan joined the agreements.)

A key part of the agreements allowed the use of Saudi airspace, for the first time ever, by Israeli commercial aircraft flying east en route to the Gulf.

In this file photo from September 15, 2020, Prime Minister Benjamin Netanyahu, left, US President Donald Trump, Bahrain Foreign Minister Abdullatif al-Zayani and United Arab Emirates Foreign Minister Abdullah bin Zayed al-Nahyan pose for a photo on the balcony of the Blue Room after signing the Abraham Accords during a ceremony on the South Lawn of the White House in Washington. (AP Photo/Alex Brandon, File)

Netanyahu, unaware of the licensing crisis until his conversation with the crown prince, immediately ordered the Defense Ministry to deal with the issue, according to the report.

A ministry official called the NSO operations room that evening and requested that the Saudi systems be turned back on. But the company’s compliance officer on duty denied the request and demanded a signed license, according to The New York Times.

The manager allegedly told the employee that the orders came directly from Netanyahu. He then agreed to accept an email from the ministry, and before long the Pegasus spyware was up and running again in Saudi Arabia.

The following morning, a Ministry of Defense courier delivered a stamped and sealed permit to NSO headquarters, according to the report.

A logo adorns a wall on a branch of the Israeli company NSO Group, near the town of Sapir, in southern Israel, August 24, 2021. (Sebastian Scheiner/AP)

The initial sale of Pegasus to the kingdom, overseen by Prince Mohammed, was made in 2017 for an installation fee of $55 million, according to the report.

Only a small group of senior defense officials, reporting directly to Netanyahu, took part in the talks with the Saudis, all “under extreme measures of secrecy,” one of the Israelis involved in the attack told the newspaper. case.

“Keeping the Saudis happy was important to Netanyahu, who was in the midst of a covert diplomatic initiative that he said would cement his legacy as a statesman — a formal rapprochement between Israel and several Arab states,” the report said. report.

In this photo taken on December 15, 2014, Jamal Khashoggi attends a press conference in the Bahraini capital, Manama. (AFP/Mohammed Al-Shaikh)

In a statement released Friday by Netanyahu’s office, the former prime minister denied the report.

“The assertion that [then-]Prime Minister Netanyahu talking to foreign leaders and offering them these systems in return for political or other achievement is a complete lie,” the statement read.

“All sales of this system or similar products by Israeli companies to foreign countries are made with the approval and supervision of the Defense Ministry, as required by Israeli law,” Netanyahu’s office said.

NSO says it only sells Pegasus to governments for the purpose of fighting crime and terrorism. All sales require Department of Defense approval. Although it says it has safeguards in place to prevent abuse, NSO says it has no control over how a customer uses the product and no access to the data it collects. He says he terminated several contracts due to improper use of Pegasus.

The company has been embroiled in numerous scandals in recent years and has faced a torrent of international criticism over allegations that it helps governments, including dictatorships and authoritarian regimes, spy on dissidents and rights activists. .

In recent weeks, the Israeli business daily Calcalist published a series of reports alleging that Israeli police used Pegasus without proper authorizations to keep tabs on Israeli targets, including political protesters. Police have denied abusing the product, but Israel’s attorney general has opened an investigation into the matter.

In November, the US Department of Commerce blacklisted NSO Group, adding it to the list of foreign companies that engage in malicious cyber activities.

The New York Times further reported that the Pegasus spyware was purchased by the FBI and an NSO team traveled to the United States to set it up.

However, according to the report, after extensive testing, the US security agency finally decided not to deploy the spyware.

An FBI spokesperson told the newspaper that they often review the possibility of using new technologies “not only to explore potential legal use, but also to fight crime and protect both the American people and our communities.” civil liberties. This means that we regularly identify, evaluate and test technical solutions and services for a variety of reasons, including possible operational and security issues that they could land in the wrong hands.

During a global pandemic, a small country produces research that helps guide health policy around the world. How effective are COVID-19 vaccines? After the first two injections, does a third dose help? What about a fourth?

When The Times of Israel began covering COVID-19, we had no idea our little beat would become such a central part of world history. Who could have known that Israel would be the first at almost every step in the history of vaccination – and generate the research so urgently needed today?

Our team covered this story with the rigor and precision that characterizes Times of Israel reporting on all topics. If it is important to you that this type of media organization exists and thrives, I urge you to support our work. Will you join the Times of Israel community today?

We’re really glad you read X Articles from The Times of Israel over the past month.

So now we have a request. Unlike other media, we don’t have a paywall in place. But since the journalism we do is expensive, we invite readers to whom The Times of Israel has become important to support our work by joining The Times of Israel community.

For just $6 a month, you can help support our quality journalism while benefiting from The Times of Israel WITHOUT ADVERTISING, as well as access to exclusive content available only to members of the Times of Israel community.