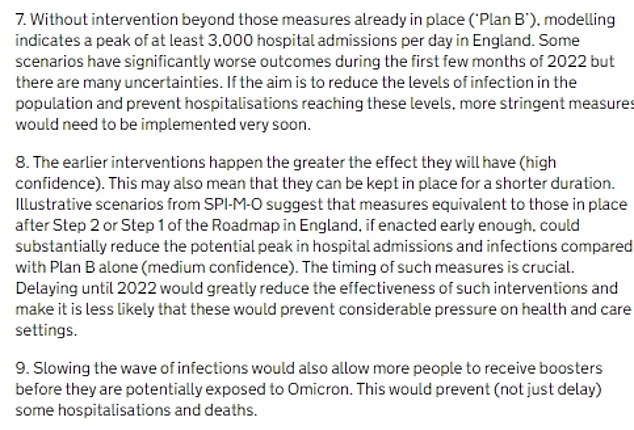 SAGE has backed a dramatic shutdown of non-essential stores and a ban on mingling households to avoid a torrent of hospitalizations and deaths with Omicron rioting.

The minutes show that the government’s main advisory body agreed on Thursday that hospitalizations could reach at least 3,000 a day in England alone without “strict measures”.

The grim modeling of the SPI-MO group examined at the meeting suggests admissions could reach 10,000 per day – with as many as 6,000 deaths per day.

The SAGE consensus indicates that “earlier interventions” would have a “greater effect” and could possibly be in place for a “shorter duration”, arguing that they will be much less effective if delayed after the New Year.

The statement suggests effectively tearing up the government’s so-called “irreversible” roadmap of foreclosure – of going back to stage 1 or 2, which means only essential retail opening and no mixing between households.

The minutes show that the government’s main advisory body agreed on Thursday that hospitalizations could reach at least 3,000 a day in England alone without “strict measures”. 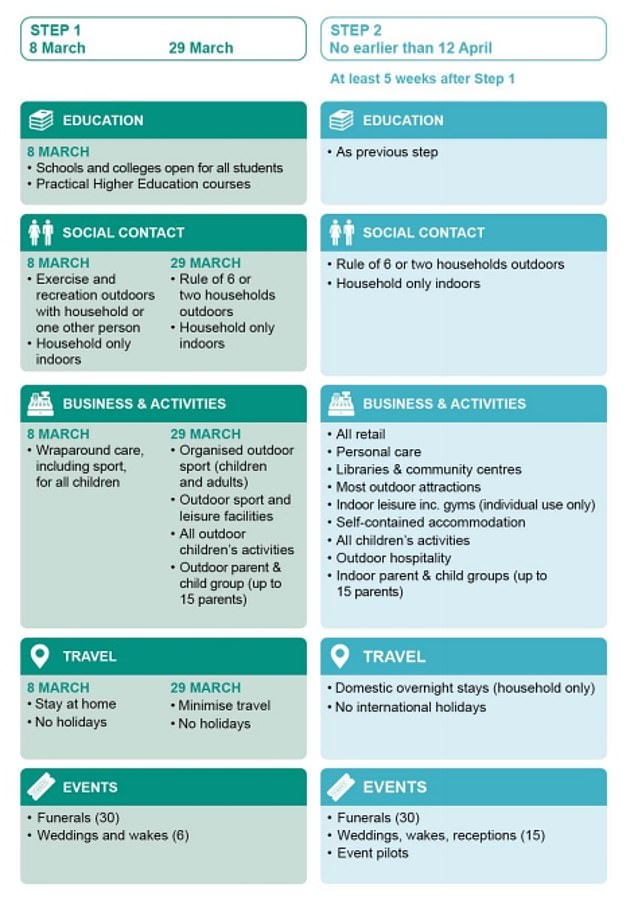 The statement suggests effectively tearing the government’s supposedly ‘irreversible’ roadmap out of lockdown (pictured) – returning to stage 1 or 2, which only means opening essential retail stores and no mixing between them. households 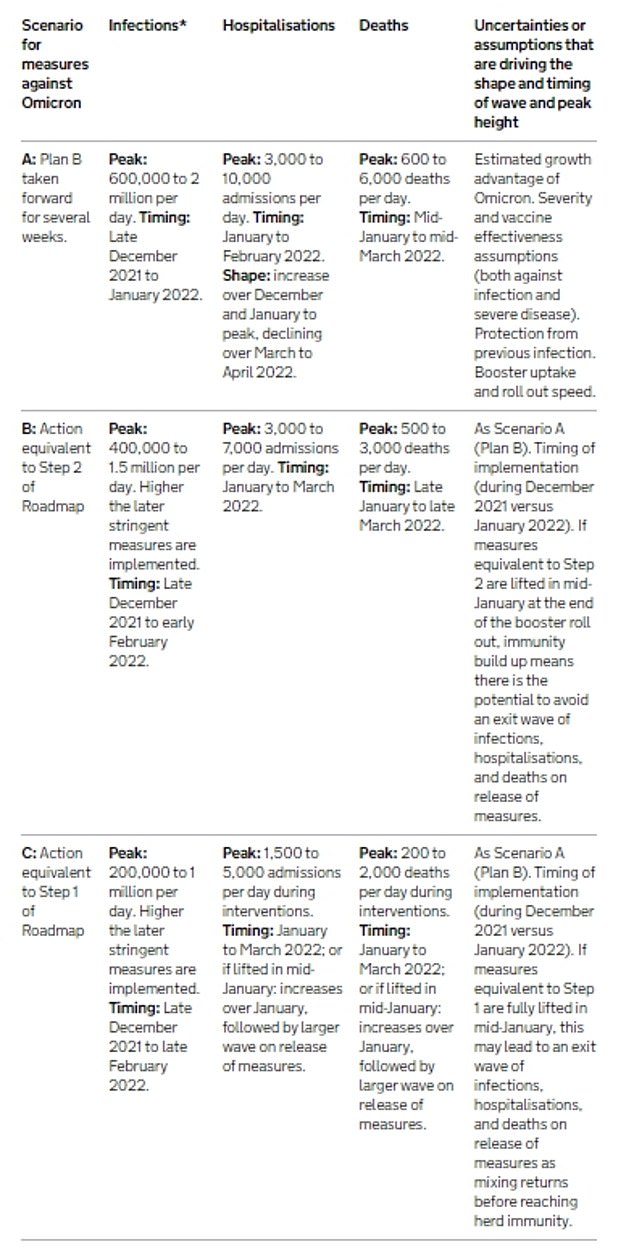 Grim modeling of the SPI-MO group examined at the meeting suggests admissions could reach 10,000 per day – with as many as 6,000 deaths per day 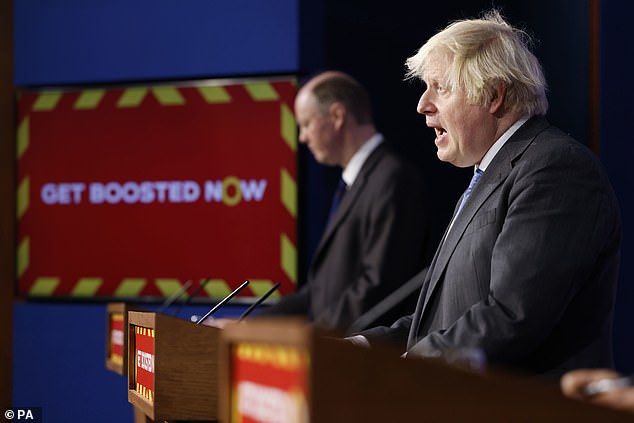 “Illustrative scenarios of SPI-MO suggest that measures equivalent to those in place after Stage 2 or Stage 1 of the roadmap in England, if adopted early enough, could significantly reduce the potential peak of hospitalizations and infections compared to plan B alone (medium confidence), ”SAGE said.

“The timing of such measures is crucial. Delaying until 2022 would dramatically reduce the effectiveness of such interventions and make it less likely that they prevent significant strain on health and care facilities.

“Slowing the wave of infections would also allow more people to receive boosters before they are potentially exposed to Omicron. This would prevent (not just delay) some hospitalizations and deaths.

The SAGE articles make it clear that there is still a lot of uncertainty about the threat posed by Omicron.

But they cite “great confidence” that it will spread faster than the Delta variant and will sweep the country.

There is deep resistance among ministers over the prospect of returning millions to lockdown, destroying Christmas yet again as the evidence remains unclear.

Questions have also been raised about whether Mr Johnson even has the political capital to pass restrictions, after a massive revolt against Plan B last week and the explosive resignation of his Brexit minister Lord Frost of the day. the next day, underlining the danger of “coercive” policies.

However, Health Secretary Sajid Javid appeared to hint at imminent change this morning, saying SAGE’s analysis is “sobering” and the government is ready to “do what is necessary”.

Urged on whether a circuit breaker could be ruled out before Christmas, Mr Javid told the BBC’s Andrew Marr show: “There are no guarantees in this pandemic, I don’t think so.

“At this point, we just have to keep everything under control. “

Among the scientists’ advice, he said: “This is a very dark analysis. We take it very seriously.

“We need to challenge the data and the underlying assumptions, I think that’s appropriate, and take into account a larger set of facts.” 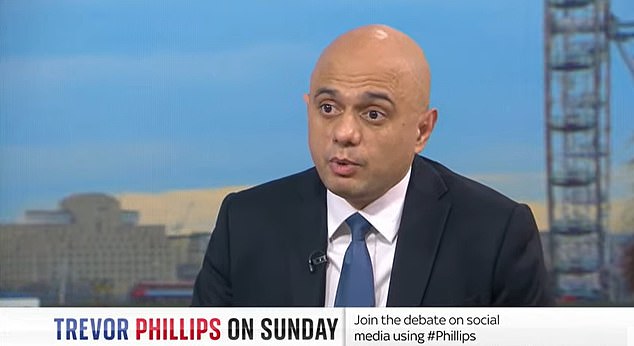 In interviews this morning, Health Secretary Sajid Javid said the government must use “data we have” and infections are rising rapidly.

He also strongly pledged that parliament would be recalled if any action needed to be taken.

In the first stage of the roadmap in March this year, only individual mixing was allowed outside of households, and non-essential retail businesses were still closed.

At the second stage, the following month, bars and restaurants could serve customers outside and households were not allowed to mingle inside.

Cabinet Office Minister Steve Barclay will later chair a Cobra meeting that is expected to consider the option of a “circuit breaker” lockout.

But there would be considerable opposition within Cabinet.

A minister told the Sunday Times: “We cannot have a situation where we lock up every winter and kill the economy. We have to stop reading what is going on in South Africa versus what is going on here. It’s like comparing apples to pears.

There is speculation that the “handbrake will be pulled” after December 25, with claims that an ad was written for Boxing Day.