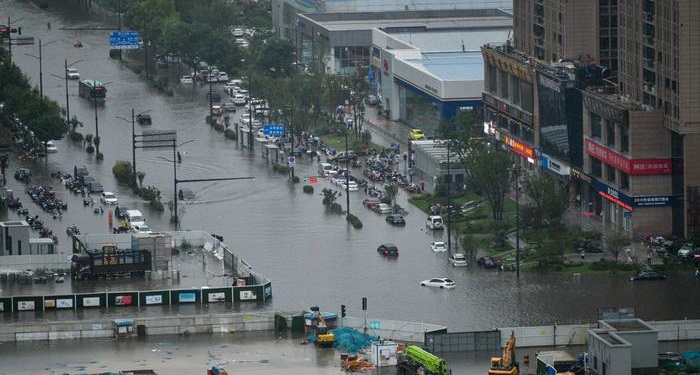 Unusually heavy rains have fallen in the province – twice the size of Austria with a population of 94 million – since the weekend.

Dozens of cities have experienced massive disruption to transportation services. The provincial capital of Zhengzhou, located on the Yellow River, had to shut down all subway services on Tuesday after 200 millimeters of rain fell in just an hour.

A video widely shared on social media showed torrents of water cascading through one of the city’s metro stations as well as people standing waist-deep in the water inside an oar metro.

Devastating floods around the world

No deaths or injuries have been reported so far, but some 10,000 residents of the province have been relocated to shelters, according to the Xinhua news agency.

Henan is a particularly populated province and a major transportation hub. It is also a key base for industry and agriculture.

Summer often brings heavy rains and flooding to the region, but the growth of cities and changes in land use have increased the costs of flood damage.

The floods in central China come days after catastrophic flooding that left more than 160 people dead in western Germany.

New York City also found itself with flooded subway stations after being hit by Tropical Storm Elsa earlier this month.

The famous Shaolin Temple of Dengfeng, known for the martial arts mastery of its monks, was also forced to close.

The highest amount recorded by the provincial meteorological office during this period was 498mm of rain in the city of Lushan.

Asians are represented in classical music. But are they seen?