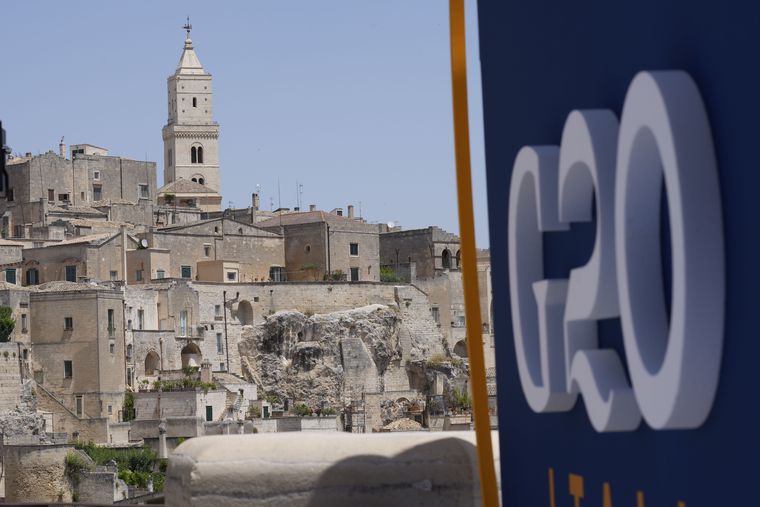 MATERA, Italy (AP) – A meeting of Foreign Affairs and Development ministers of the Group of 20 nations ended on Tuesday with an agreement to step up efforts to tackle the growing hunger in the world, made worse by the pandemic, by particularly in Africa, as well as the effects of climate change.

But there were also notes of contention, with Germany and China taking hits on each other over vaccine policy for developing countries.

Italian Foreign Minister Luigi Di Maio, who hosted the meeting, argued that assistance projects in Africa will also affect migration from the continent to Europe.

“The G-20 has a duty to help Africa emerge from a difficult period,” he said at a closing press conference.

“We have to do it in such a way that in Africa people are no longer forced to abandon their country and their territory, and I believe that no one can fight this battle alone,” said Di Maio, who announced that Italy will host a conference devoted to Africa in Rome in October.

Di Maio said hunger on the planet has been increasing since 2014 and warned that the COVID-19 pandemic could add an additional 100 million people to the ranks of those suffering from hunger and malnutrition. “It is clear that one of the first steps in building a better world is to make sure that everyone is fed,” he said.

The one-day meeting resulted in the so-called Matera Declaration, a “call to action” on food security, nutrition and food systems. Matera is a picturesque hilltop town in the south of Italy’s underdeveloped Basilicata region, which hosts the talks.

In the declaration, ministers agreed that “advancing these goals requires collective and coordinated global leadership and action and a people-centered approach”.

“The G-20 is well positioned to provide such leadership, while promoting an inclusive approach with all stakeholders, private and public, and pursuing ambitious but concrete and achievable agendas,” the statement said.

The Group of 20 nations represents more than half of the world’s population and about 80% of its GDP.

The declaration also recognizes the need to “accelerate the adaptation of agricultural and food systems to climate change”.

“Beyond the differences and distances between certain countries present at the G-20 table, we all agree on climate change, sustainability, on the major problems which today can only be solved with global cooperation, ”said Di Maio.

But there were heated exchanges involving some of the major powers during the day.

Upon arriving, German Foreign Minister Heiko Maas said it was “important that we sit down together in this round with countries like Russia and China, and openly address the fact that we don’t think much. to their vaccine diplomacy “.

Maas was referring to China and Russia supplying or selling their own produced vaccines to less developed countries, although some European countries, including Hungary and San Marino, are eager to source the Russian Sputnik V vaccine. The West believes that China and Russia have provided their vaccines to the poorest countries in order to strengthen their power.

Neither China nor Russia sent their foreign ministers. Chinese Minister Wang Yi addressed the meeting remotely and retaliated against Maas.

China, he said, “has provided more than 450 million doses of COVID-19 vaccines to 100 countries.” The Chinese minister attacked Western countries, adding that countries capable of supplying vaccines should “avoid restrictions on exports and excessive storage” of vaccines,

“To end the pandemic, we need to get more vaccines to more places,” US Secretary of State Antony Blinken said at the meeting. “Multilateral cooperation will be essential to stop this global health crisis. “

Blinken took the opportunity to praise the United States’ contributions to COVAX, the UN-backed program to provide vaccines to countries in need, which includes approximately 500 million doses of Pfizer and 80 million more. doses.

The German Meuse signaled the emergency. “I think the main thing now is to quickly create alternatives so that countries, regions like Africa, for example, can be supplied with vaccines more quickly,” he told AP. He suggested focusing on providing supply chains as well as production facilities.

D’Emilio brought back from Rome.