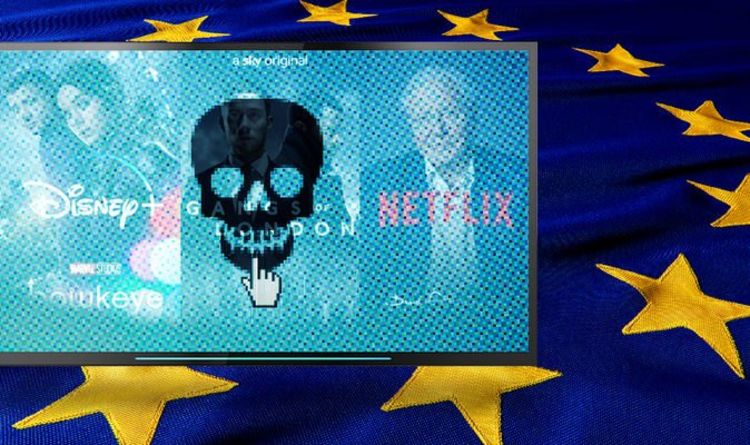 This article contains affiliate links, we may receive a commission on any sales we generate from it. Learn more

This week, Brussels lawmakers have turned the screws on internet pirates, putting increasing pressure on those who use free and illegal Netflix, Sky TV and Prime Video streams. Just days ago, Express.co.uk reported that the EU was looking at ways to ban people from viewing websites that promote online piracy at the very first point of access. And now, in the wake of this news, it has been revealed that the European Parliament (EP) has taken a vote that will severely hamper the operations of hackers on the internet.

The DSA includes measures for how takedown notices are handled by online services, as well as upload filters – which would automatically prohibit users from attempting to upload content deemed illegal.

There was backlash from both sides when DSA’s first draft was revealed, with proponents of stricter copyright measures believing it didn’t go far enough and others believing it was too drastic.

Squid Game: Jung-jae Lee in the trailer for the Netflix series

When the vote came to approve the DSA, an amendment was tabled that would have effectively banned the use of these controversial download filters.

However, despite the belated attempt to stop the measures, MPs voted against banning download filters – with 434 against and 242 in favour.

The news was a disappointment for Pirate Party MEP Patrick Breyer, a member of the European Parliament’s Civil Liberties Committee.

Breyer tweeted: “Internet companies use unreliable upload filters against supposedly illegal content – with a lot of collateral damage. The majority won’t even limit automated censorship to content that is patently illegal, regardless of context.”

Streaming movies, TV shows, or sports that you should pay to watch is illegal.

This violates the rights of copyright owners and can end up costing you much more in the long run – with cases of rights owners in the past coming into contact with people who were illegally streaming their content and demanding heavy damages .

Besides the legal dangers, watching illegal free streams online poses other risks. Free movies and TV shows sites can be filled with dangerous malware that you can download to your device without even realizing it.

Malware can significantly slow down the performance of your device, while malware can also lead to the theft of your sensitive personal or financial data.

Apart from illegal streaming websites, IPTV devices are another popular hacking tool. IPTV stands for Internet Protocol Television, and as the name suggests, it is a television service delivered over the Internet.

There are legal IPTV services (such as Sky’s contract-free NOW service), but there are also many illicit IPTV offers.

And these latest illegal services come with surprising dangers, such as graphic content such as violent horror movies or pornography displayed next to movies or TV shows that kids would want to watch.

So if you have young people in your home who are using an illegal IPTV service, you can open the kids up to content you wouldn’t want them to watch.

In recent years, copyright holders have stepped up their anti-piracy efforts, with major Hollywood studios such as Netflix and Disney joining together to form the Motion Picture Association (MPA), which – along with its anti-piracy partner hacking the Alliance for Creativity and Entertainment (ACE) – led the charge to block hundreds of hacking websites used by millions of people.

Although you may be tempted by websites that offer free streams of paid content, watching such streams or downloading pirated torrents is illegal and no different from stealing a Blu-Ray from your local entertainment store. .

Besides being against the law, not paying for content legitimately means the money isn’t going to the content creators themselves and helping fund their work. Without it, you wouldn’t have shows like last year’s Squid Game.

News of the recent anti-piracy measures vote comes days after it was revealed that the EU was working on a new scheme that would ban internet users from visiting websites promoting piracy from the first point of view. access.

The way it works revolves around the Domain Name System (DNS), which is an essential part of how the internet works – and has been for decades.

A crucial part of this are DNS resolvers, which allow people to easily access and locate any website on the net. This system was once dubbed the Internet phone book. Today, the DNS resolver market is largely dominated by American companies such as Google, Cloudflare, and Norton.

But to combat this, the EU is planning to launch its own DNS resolver under the DNS4EU project. EU-operated DNS resolvers are intended to protect user privacy, protect against malware and phishing attempts, as well as comply with privacy regulations such as GDPR and prevent monetization of user data.

But the European Commission (EC) – which is the legislative arm of the EU – could also ensure that EU DNS resolvers automatically block users from accessing any website deemed “illegal” – which could include sites that facilitate hacking.

So that would mean websites that offer free streams of Netflix, Prime Video, Sky TV and more, as well as torrent download portals.

Speaking of URL filters, the DNS4EU project documentation states: “Filtering of URLs leading to illegal content based on applicable legal requirements in the EU or national jurisdictions (e.g. based on court orders ), in full compliance with EU rules.”

In response to the news, Breyer said infringing content should be removed instead of blocked due to the risk of overblocking.

Breyer said, “Illegal content should be removed where it is hosted.”

“Access blocking leaves content inline and can therefore be easily circumvented and often results in overblocking and collateral removal of legal discourse hosted on the same website, by the same provider or through the same network.”

New ‘BHUNT’ Malware Steals Your Cryptocurrencies, Most Widespread in India