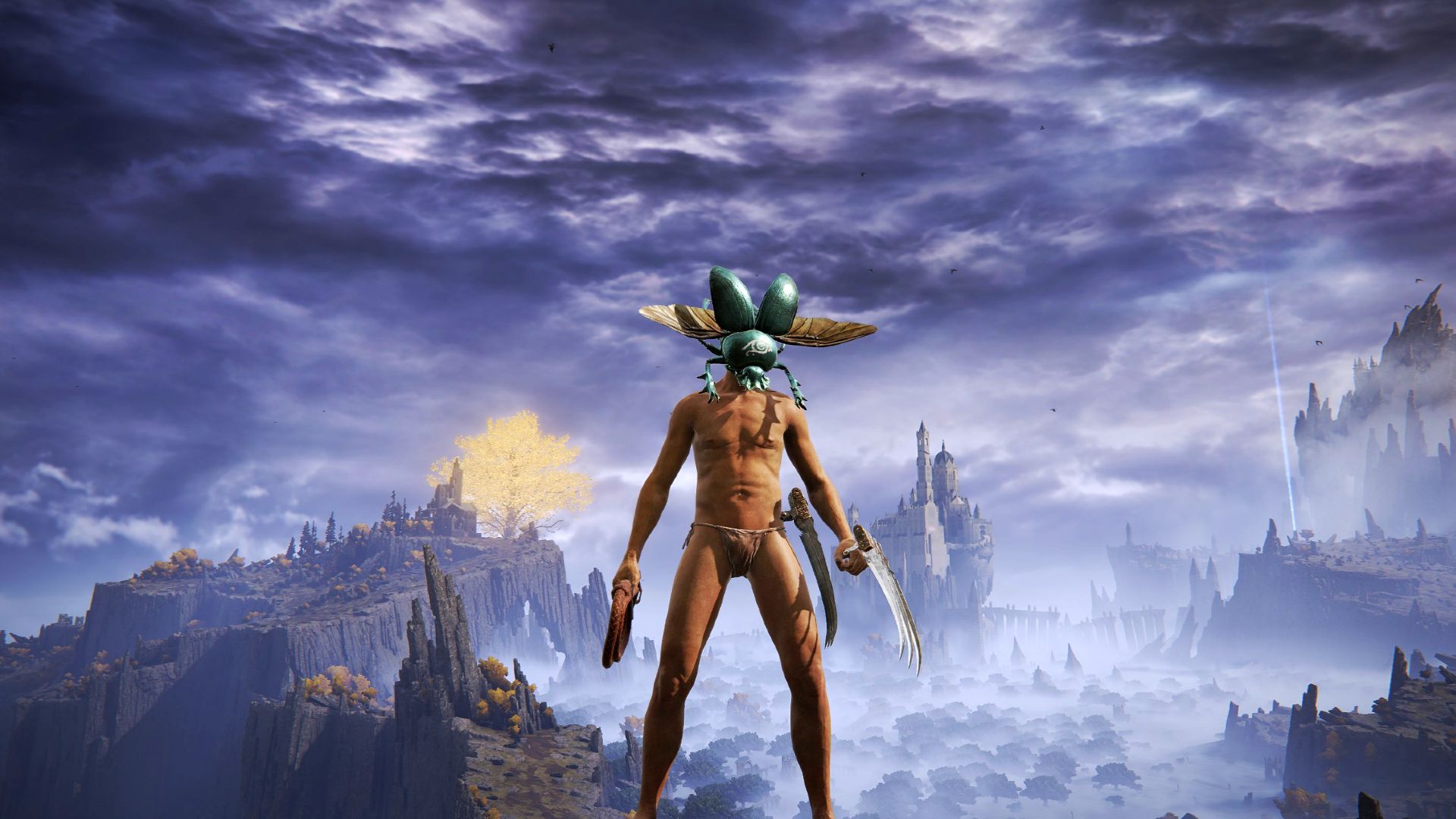 About 20 hours after Elden Ring, I come across an old ruined church near a lake. Inside, a giant tortoise wearing a papal miter welcomes me and teaches me powerful new sorceries. A few steps from the church, I see a gigantic lobster. He seems friendly enough, but he’s not facing me, so I get off my horse and approach him on foot. Just when I expect the “speak” prompt to appear, she circles around, grabs me with pliers, then repeatedly slashes my face with the other before throwing my lifeless body into the murky waters of the swamp. As everything goes black and “You Died” appears on the screen, I let out a chuckle that lasts nearly a minute.

Elden Ring is truly, really funny. Sure, player messages – like signs that point to a turtle and simply read “dog” – are good for a titter, but Lands Between is FromSoft’s most overtly funny world to date. It’s full of humorous Easter eggs, in-jokes that go on way too long, and comical little embellishments in its monster design.

There are some minor spoilers aheadso if you don’t want to hear about NPCs or enemies, click, preferably on our Elden Ring review.

Admittedly, not everything seems intentional. At first, you encounter wolves and guard dogs in the open world. As you progress through the lands between the wolves are replaced by larger and more ferocious werewolves, and the dogs by rabid strays. Then you start encountering red wolves and scarlet rotten strays. Eventually, as if it were the game’s longest prank drop, FromSoft lacks the means to noticeably elevate its canines, and so the crimson region of Caelid is patrolled by dogs of the shape and size from Tyrannosaurus rexes – they’re terrifying, but they’re also extremely stupid, like a developer got carried away with “big-headed” modifiers.

But there are clear jokes here. One of the first Elden Ring dungeons you can clear ends with a boss battle against a man called Patches. Souls fans are very familiar with this character: he has appeared in various guises throughout the series, usually luring the player to certain death so they can obtain loot.

His plot here is more elaborate than ever. He attacks you for stealing a treasure chest and demands money as a reward – it’s clear he’s been running this scheme for quite some time. If you hurt him enough, he’ll beg for mercy, and if you accept his plea, he’ll open a shop. Spend a few thousand runes on Patches’ wares and he’ll thank you for being such a loyal customer, before giving you the key to another treasure chest, telling you that everything inside yours. Opening this chest will teleport you right next to a gargantuan bear that will spot you and kill you the moment you move. Patches plays the long game in Elden Ring – that’s not the only result either – and there’s no way to stop a smile from spreading across your face when he finally manages to exploit your greed.

there is no mechanism that punishes you for successive deaths, so you are free to frolic in your own blunders

Even the trunk itself is a witty nod to the series’ past. Soulgames has played with chests before, most notably with an enemy called the Mimic, which looks like a normal chest but sprouts arms and legs when you open it, before snapping its jaws and emitting a scary chuckle as he swallows you down. I spend the first ten hours attacking every chest I come across in case it tries to eat me, only to open one and have it send me to one of the most dangerous areas in the game.

Some of the monster designs are also hilarious. Groups of wooden warriors called puppet soldiers will rush into a frenzy if you get too close, rapidly swinging their many swords before fading away – they’re like wandering Beyblades of death that twitch and spasm on the ground after a very good rotation.

Sheep aren’t just sheep – for some reason they curl up and sonic-roll around the wildflower meadows. Humanoid albinaurics, on the other hand, have heads so large they are always bent over, and they use their dangling legs to launch a deadly cartwheel attack. Everything is so… idiot.

Soulgames have always had humor, but their worlds are too oppressive for the fun parts to feel like more than necessary stress relief.

And then there’s the Schadenfreudian stuff, like an NPC giving you a free consumable item, but not bothering to inform you that you’ll have less health while the item is in your inventory. I had this debuff active for 40 hours. Or the fact that the NPC that grants you the ability to summon spirit ash can only be found by returning to a specific location after receiving your horse, Torrent – I had to beat Margit and Godrick without those summons, and now i watch other players beat the same Elden Ring bosses backed by poison spitting jellyfish and packs of wolves.

Games like The Stanley Parable, Psychonauts, and Portal are fun, but there’s a dark, rich, tacky vein of humor that runs through Elden Ring that made me cry with joy a few times. Soulgames have always featured long-running jokes and wry humor, but their worlds are just a bit too oppressive for fun parts to ever feel more than a necessary stress reliever.

Because there are so many checkpoints and rest areas; because it’s easy to recover lost runes by simply uploading them to Torrent; and because there are no mechanisms like “digging” that punish you for successive deaths, you are free to frolic in your own blunders and in the traps set for you.

I enjoy being knocked off cliffs by rolling sheep and being transported to hellish places by trapped treasure chests, as I’m not really worried about how it will impact my progress.