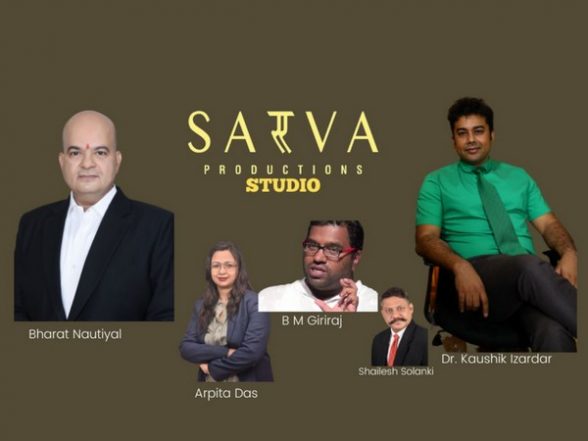 Bombay (Maharashtra) [India]May 6 (ANI/PNN): Sarrva Productions Studio has partnered with UK-based venture capital for an initial investment of $30 million for the creation of all forms of intellectual property, including films, web series and child-centric content on the OTT platforms.

Sarrva Productions Studio has appointed some of the well-known industry experts as its core team members including Arpita Das, the creative head who worked on Abhay2, Ishq Par Zor Nahi, Shoona Square and many other projects, BM Giriraj, film and theater director who has made more than six films and three of his films – Jatta, Mythri and AMaravati has won national, national and international recognition. Shailesh Solanki has been named head of production at Sarrva Productions Studio.

According to Nautiyal, BM Giriraj is the most experienced film and theater director. He wrote and directed 1222 plays and acted in more than 2000 street plays. As an author, his novel “Kathege Savilla” won the Sahitya Parishad Prize and his play Sugandhada Seemeyaache won the Nataka Academy Prize. He also wrote and directed the Karnataka government’s magnum opus, Bharata Bhagya Vidhata, a dance musical based on the life of Dr. Baba Saheb Ambedkar with 75 artists performing on stage in 30 districts.

Dr. Kaushik Izardar, CEO of Sarrva Productions, said, “We are delighted to have Arpita Das, BM Giriraj and Shailesh Solanki on our core team. They are staffed with global management talent with a proven track record of driving significant growth and creating strategic value in businesses. Adding new members is a great way to further our goal of creating a world where individuals of all abilities are fully accepted, respected and included.

This story is provided by PNN. ANI will not be responsible for the content of this article. (ANI/PNN)